English
HomeMissionNecto Labs
For Developers
For Node Runners
For Users
APIs & SDKs
Build on Mysterium
About Mysterium Network
Troubleshooting
FAQ
Legal
Seek Help
Still unable to figue out something that you couldn’t find here. Please join our Discord or Telegram channels and post your queries.

An open-source ecosystem of protocols, tools and infrastructure to liberate the web.

Mysterium brings together developers, entrepreneurs and projects all making the internet blind to borders. Our exit node network provides censorship-resistant infrastructure for the next-generation of web applications. It empowers both builders and users to access free information.

A Universal Anonymity Network
Tamper-proof, anonymous and encrypted like Tor, but with superior usability, stability and speed. Residential IPs spread across every continent, for untraceable geoshifting and data mining. Encrypted with the WireGuard protocol.

Network-As-A-Service
An infrastructure layer for P2P networking and unblocking solutions. APIs connect you to the largest exit node network in the world, built on Ethereum and Polygon. Fully compatible with both Web2 and Web3, so you can spread your project to all corners of the web.

Powered by P2P
Our permissionless P2P marketplace is open to all. Tens of thousands of nodes earn daily by sharing their IP address, providing a secure line of communication and access to the open internet. It's sustainable, scalable and community-powered. 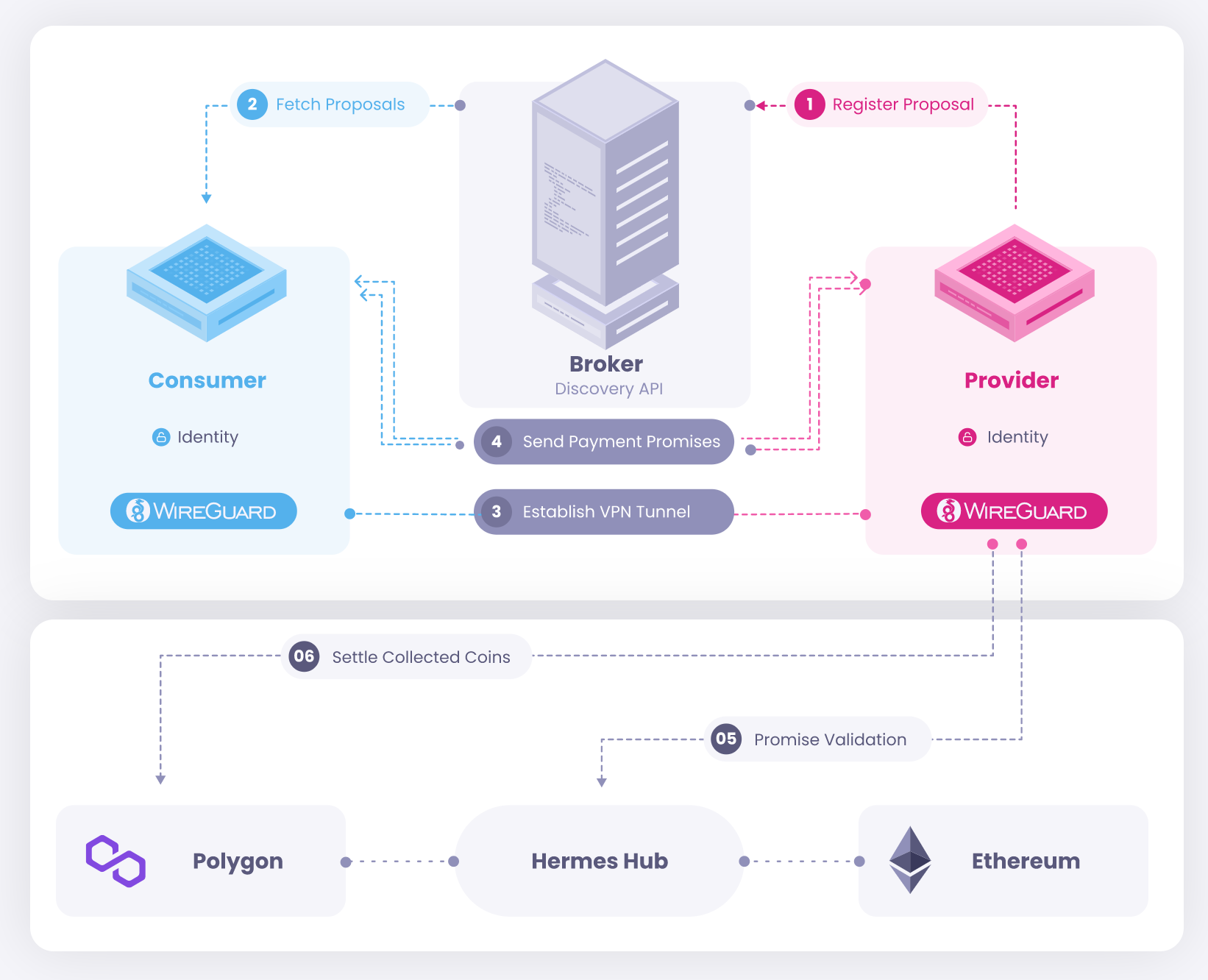 Mysterium.Network
Learn about the protocol, ecosystem and check out our blog for the latest news and updates.

MystNodes.com
Your home for running a node. Get onboarded in minutes and view your personal dashboard for all stats and earnings.

NectoLabs.io
Our open-source innovation lab driven by R&D, venture funding and strategic collaborations to build a better web for all. Apply for seed funding and build on the network!

dVPNalliance.org
Mysterium and Sentinel Networks team up to create a dVPN alliance with a goal to set standards within the VPN industry and wider privacy sector that moves us towards a free internet for all. Read our resources, such as how to safely run an exit node.

What is a Mysterium Node?

A node is a piece of software that you can run on several platforms and devices, such as a computer, which help power and maintain our distributed network.  Running a Mysterium Node will make your IP discoverable, and rentable by internet users worldwide.

Most of the internet you pay for goes to waste, sitting idle or completely unused. Peers within a distributed network like ours can easily share these excess internet resources with each other, such as storage, computing power, bandwidth and IP addresses. Any user or client of the network can pay to connect to your node, providing them with a VPN service, access to the open internet and a secure line of communication. Nodes replace the traditional role of a server. You can run Mysterium's node software on Mac, Linux, Windows, AVADO and Raspberry Pi.

Find out more about running a Mysterium Node and earning in the network.

What can you build on Mysterium Network?

Though there are many more, these are the first use cases which have already shown promise and will be a major focus in the short-term:

There are many other kinds of use cases and ideas. Check them out in our developer section and see what kinds of solutions we're seed funding over at Necto Labs.

Mysterium Network was founded in 2017 by a group of entrepreneurs and developers who envisioned a future where users all over the world could access information freely.

We officially launched on mainnet in 2021 and began our evolution into an ecosystem. Mysterium is a breeding ground for open web innovation. We have spent years building a protocol from scratch, powered by a grassroots global node network.

Now we want to invite and inspire technologists around the world to come build with us.

Check out our full roadmap and history here.